Colors Urban Hotel design had two challenges: working with a listed building which was designed by Hasid Fernandez and Jacques Pleyber in 1925, and the design of a contemporary hotel, up to the standards of the modern traveler.

The building has views both on Tsimiski and Agiou Mina streets. It has a three-parts facade with wide openings and pilasters, big interior height and a large central atrium.The unique architectural decorative elements, along with the plastering of the ceiling, had to be preserved and remain apparent. It was this requirement that led to visible mechanical installations throughout the building. Furthermore, the copper-colored elevator and railings are a unique feature of the building.

The division of each facade in three parts, defined the plan layout; three rooms in the front and back of every floor and a central one, which opens up to the atrium. The reception is located on the ground floor on Tsimiski Street, while the “Garden Bar”, the breakfast area, serving also as a cafe bar, is located on Agiou Mina Street.

On the first floor, the administrative offices, the spa and auxiliary spaces are located. The rooms occupy three floors while there is a plan to extend to the fourth floor with suites as well.

The interior design is developed around the idea of the thematic room. The themes (such as nature, music, cinema, comics, astronomy and books) make each and every room unique, differentiating them in regard to the furniture design, the colors of the flooring and the walls, the wallpapers and the graphic elements used. The furniture is made of metal and wood and it is tailor made for each room.

Another feature of the hotel is the bigger space allowance of each room, compared to the typical hotel rooms. This characteristic led to a new typology of layout, allowing the bed to be placed in the center of the room and the desk behind it, while open wardrobes and offices, as well as nooks used as nightstands, are used. The high ceilings allowed the placement of a second bed on top of the main one while the floor-to-ceiling windows to the full width of each room, open the rooms to the city view and enhance a wider feel of the space, even further. 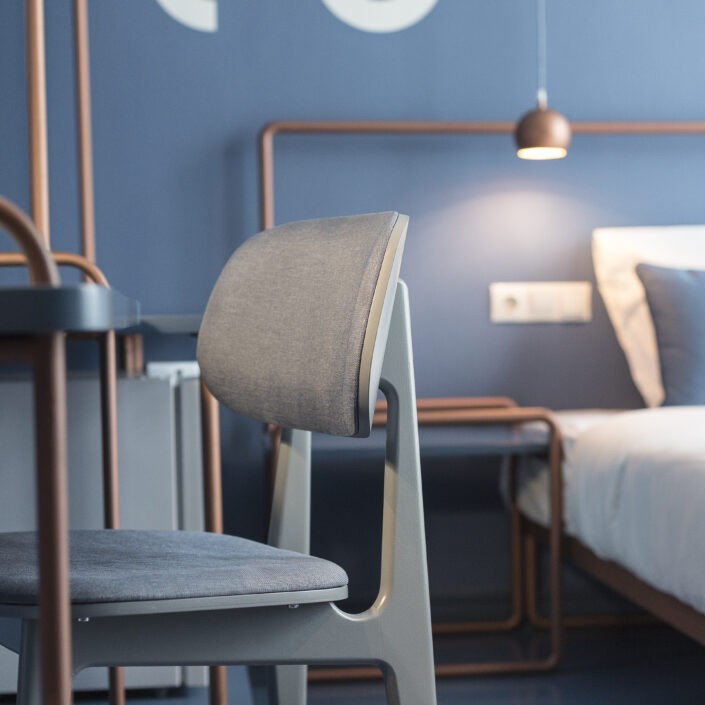 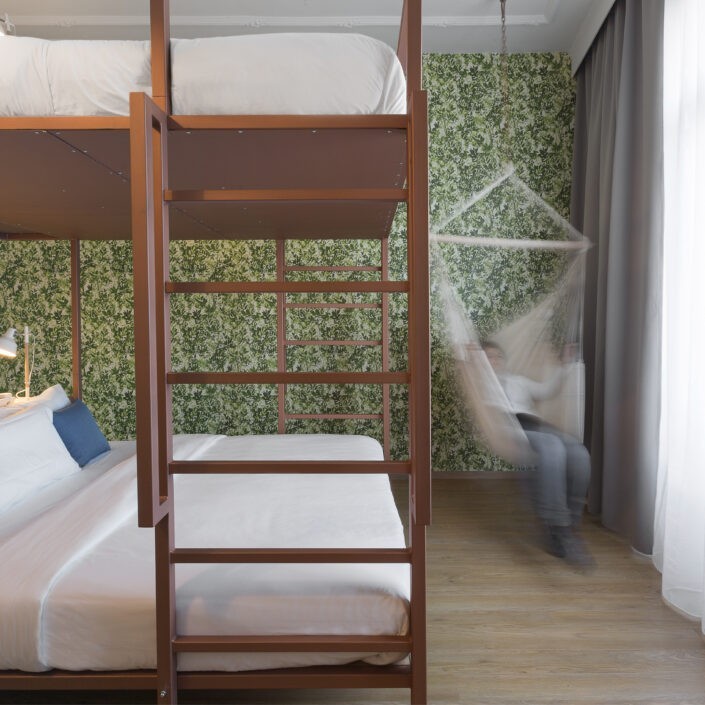 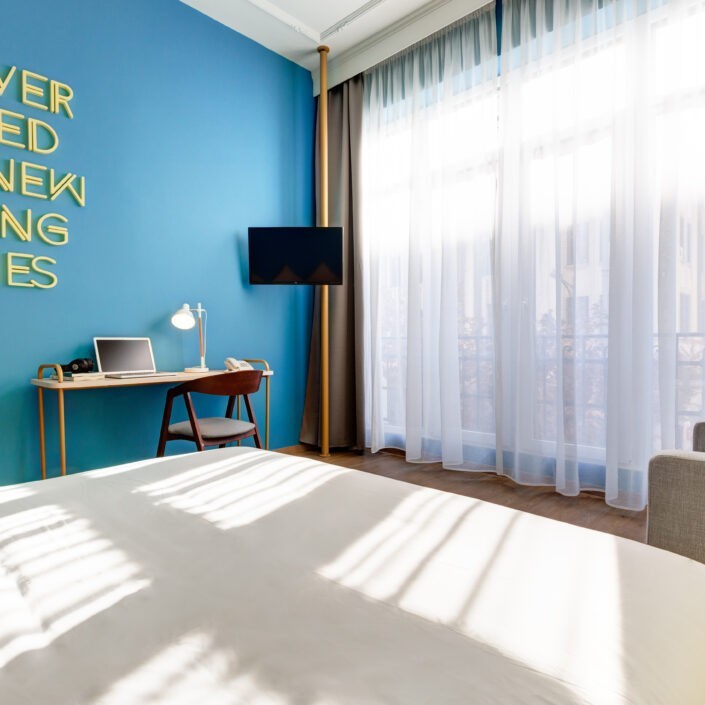 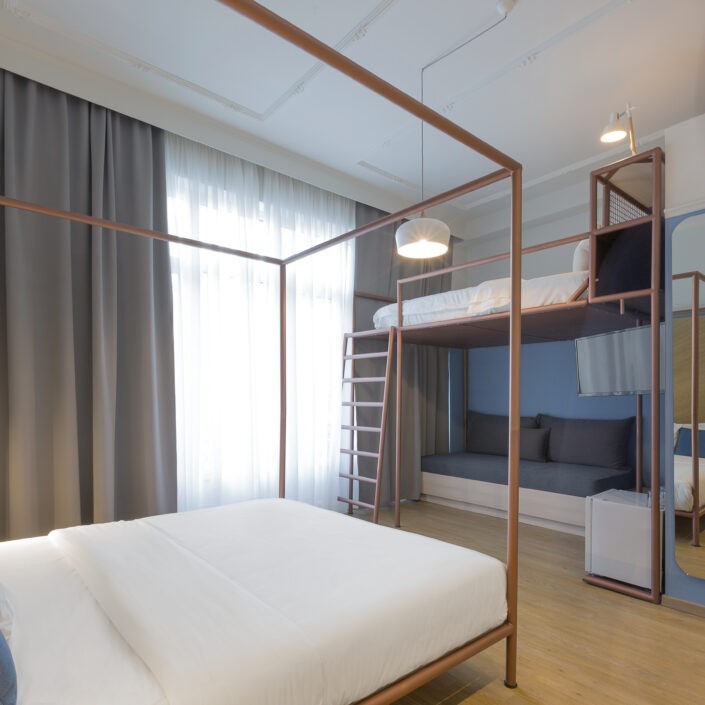 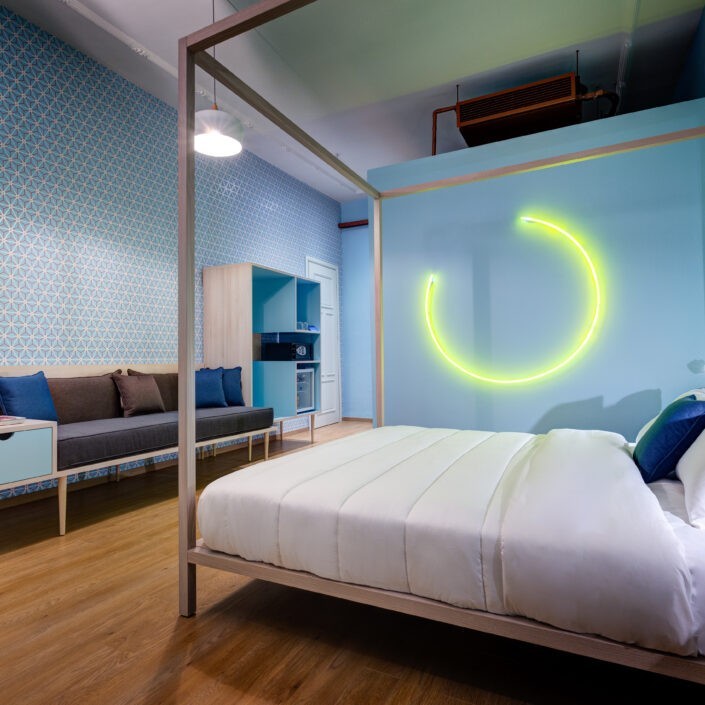 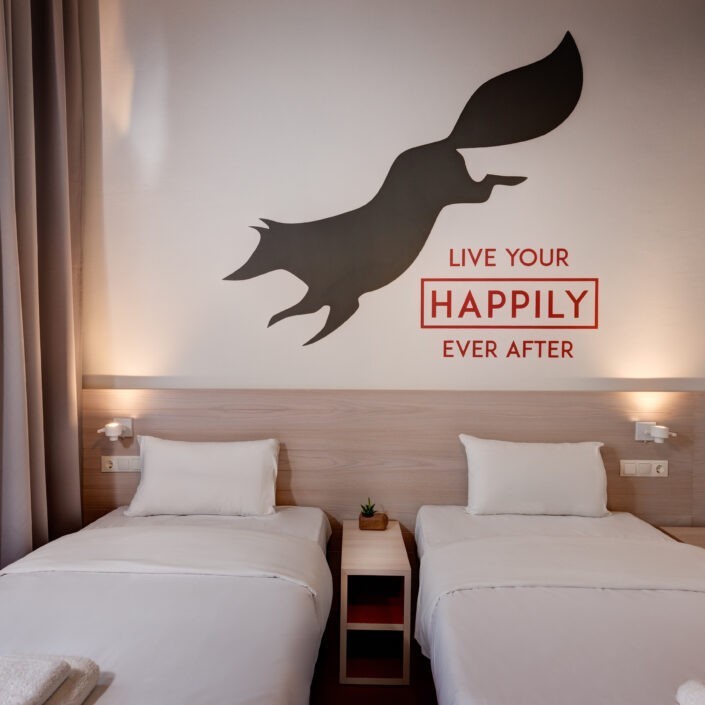 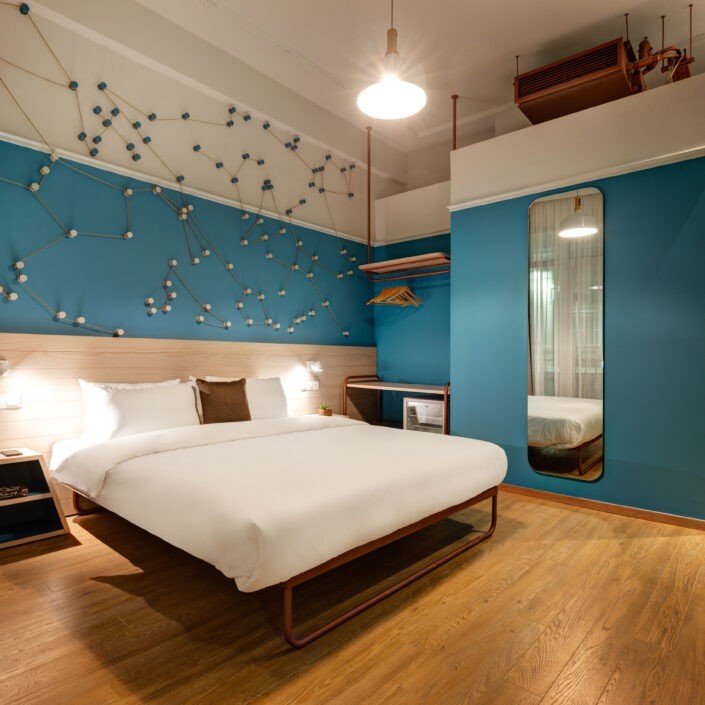 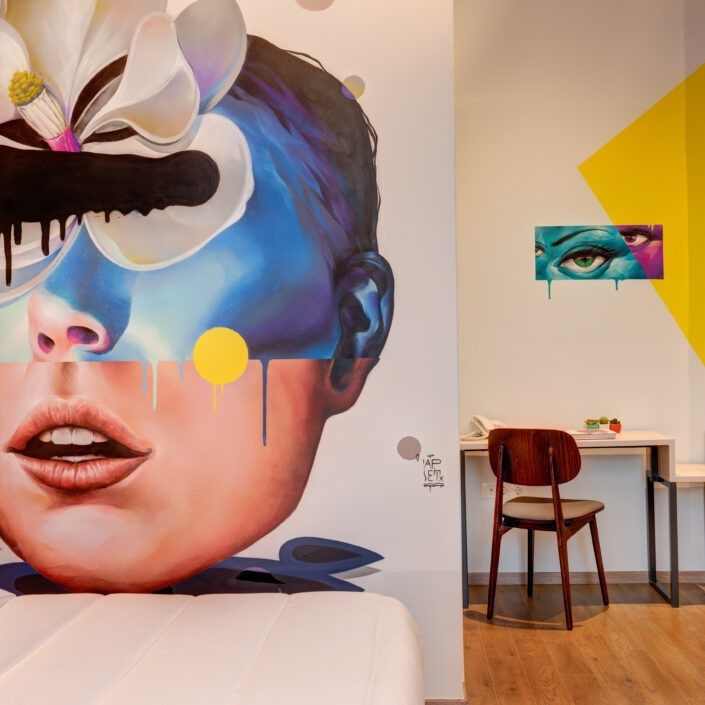 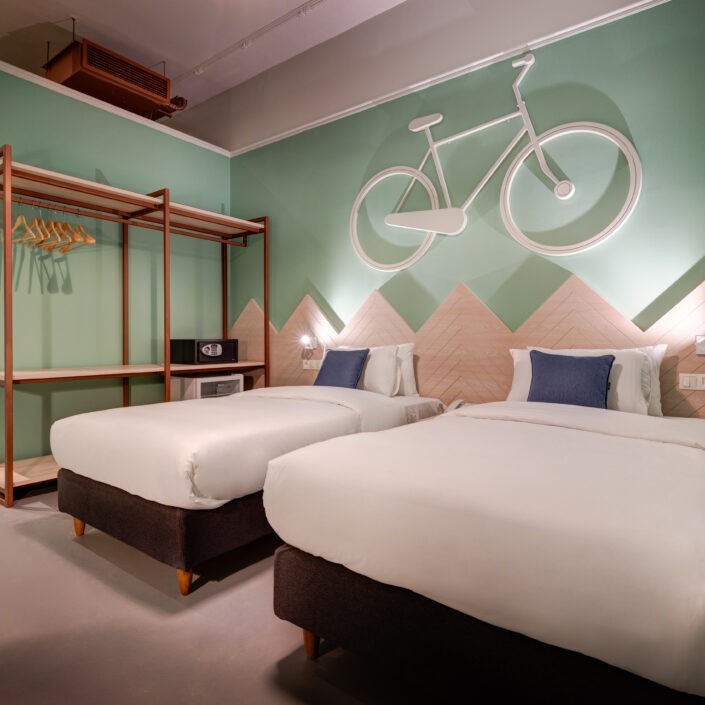 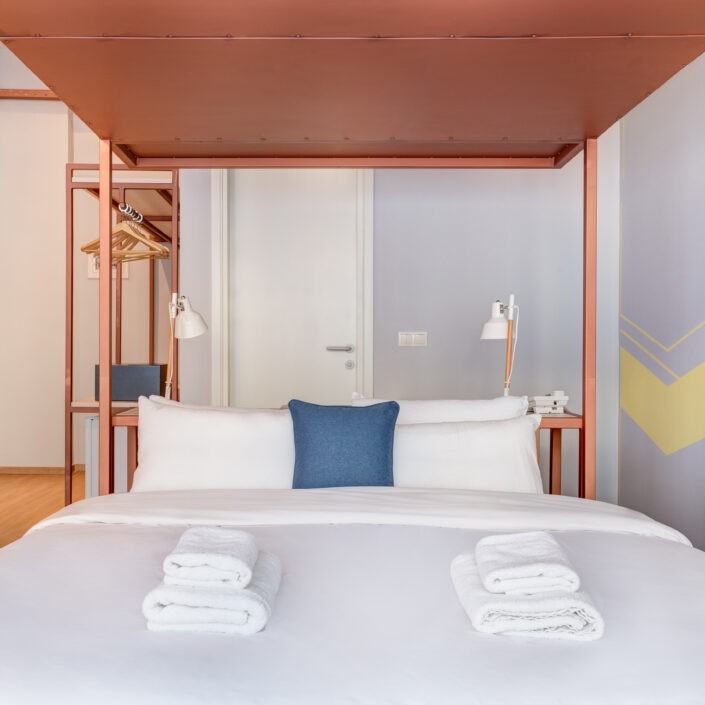 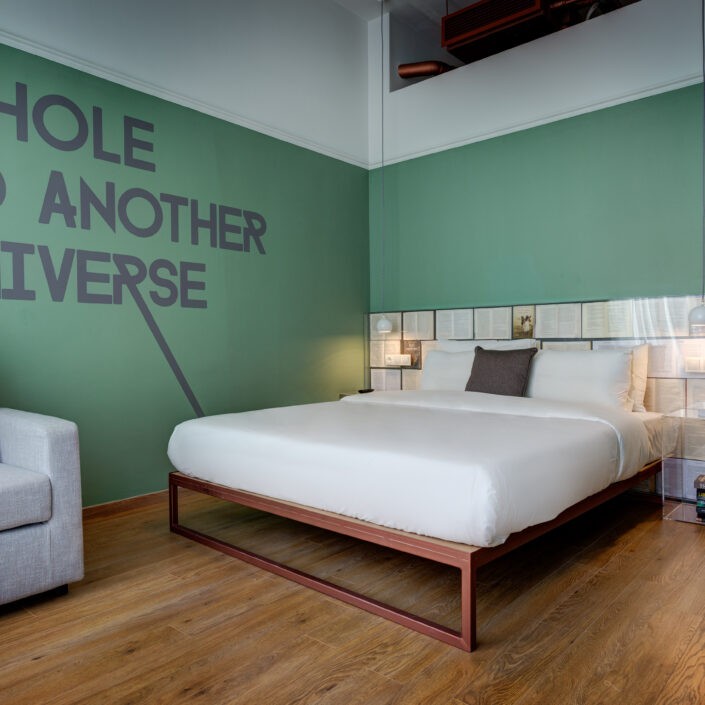 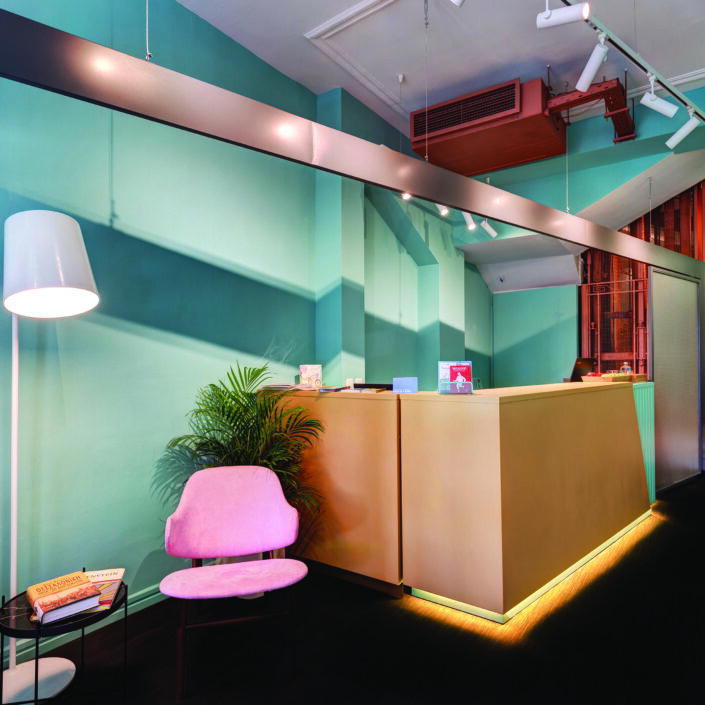